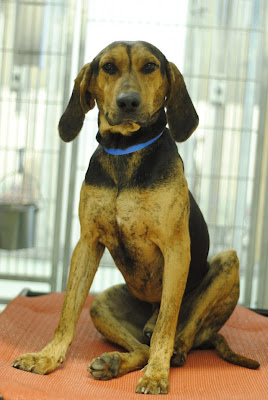 New Orleans, LA – (November 19, 2010) Charlie, a two-year-old basset hound mix, was hit by a car last Friday. His leg is broken, an injury he sustained while roaming the streets of New Orleans. Unfortunately, Charlie is not an isolated case; the LA/SPCA is reporting a staggering increase of dogs hit by cars over the past six weeks. This trend directly correlates to the suspension of routine Animal Control services and will continue to increase as the City of New Orleans has made no progress in restoring Animal Control services for this year or signing a new agreement for 2011.October 1, 2010 Animal Control began responding to "emergency cases only" because of reduced funding. The 2010 contract provided routine Animal Control including field services and stray animal pick up for the first nine months of this year. The LA/SPCA has requested $2.5 million for 12 months of services for 2011, a figure that includes $300,000 generated by the LA/SPCA in fines and fees on behalf of the City of New Orleans. The City has proposed a $1.5 million budget, a 28% decrease from the nine-month 2010 contract.

"While Animal Control Services are suspended, stray dogs are still roaming throughout New Orleans posing a danger to themselves and the community at large. Calls regarding injured animals have increased by 1,000% since October 1st. The City of New Orleans has been relying on NOPD to perform daily Animal Control services, obviously this is not happening." explains LA/SPCA CEO, Ana Zorrilla. "These animals are being injured and killed because of the City's inadequate funding for services that are needed all year long. This is an inhumane way for these animals to live and ultimately die."

Charlie's prognosis is not good. The five-day stray hold required by city ordinance is complete. While the LA/SPCA has provided pain medication during his stay, the LA/SPCA does not have the resources to perform orthopedic surgery or have an available foster home should surgery be possible. The LA/SPCA is asking for help to provide care for the increasing number of severely injured animals, like Charlie, arriving at the shelter. To become a foster home for an injured animal or make a contribution, please contact the LA/SPCA at 368-5191 or online at la-spca.org
Posted by New Orleans Pet Care at 9:52 AM